That’s a very powerful way to do layout. The system is flexible enough to make all these different layouts possible:

Sounds great! But can you tell what they all have in common?

Their number of children can be known ahead of time.

Everyone is familiar with line graphs. Here’s one I threw together in Excel: 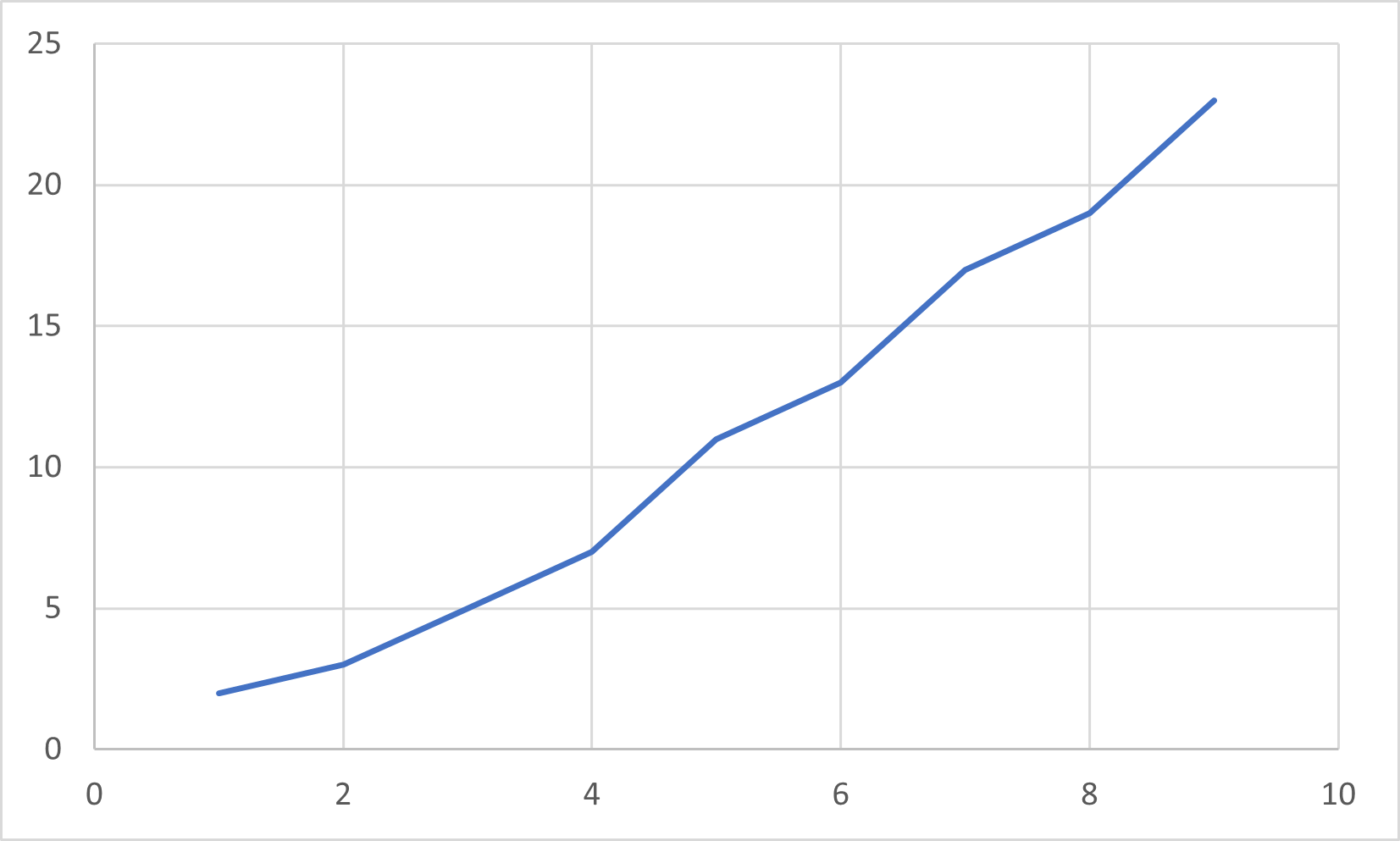 Let’s focus on the vertical axis (the numbers on the left). How would you make that in WPF?

It looks a lot like a vertical stack of text blocks, doesn’t it? Easy enough:

…then it uses a different increment.

So how many text blocks should there be? You won’t know until you try to fit the axis into a certain area.

A chart axis is different than all of the layouts I listed above because a chart axis does not know how many child tick marks it has until you put it somewhere.

Okay, so what is the soonest we can know how much space our axis has to work with, so that we can decide how many child tick marks it should have?

Well… we have access to that information as soon as the arrange pass. And we can hook into that. How about this?

There is a lot of cruft since we’re manually managing both logical and visual children. And we make some assumptions about the axis range and how tick intervals are calculated. But those aren’t serious challenges.

We managed to hook into the measure and arrange passes, and in the arrange pass we are making the correct number of tick marks. And we even abstracted away the job of creating a tick mark so that our axis control is more reusable.

Mission accomplished? Nope! Do you see the issue?

How do we know how large one tick mark is on the screen? If a tick is just a simple text block with unchanging text then it’s very easy. WPF has just the thing for measuring text. But that doesn’t work for the data template above. What if someone wants to make the tick marks a little more complex than plain old text? We could manually perform measure and arrange passes on the first one within our own arrange pass. But a lot of things only work within a logical tree. So we would have to ensure that the first tick mark (the one we’re measuring) is temporarily added to our logical tree during our arrange pass. But guess what happens when our logical tree changes? WPF performs another layout pass on us! So in figuring out how large one tick mark is within the arrange pass we end up triggering another arrange pass, which will have to calculate how large a tick mark is which will trigger another arrange pass, on and on forever.

Note that bindings in the TickTemplate might also cause the tick marks to change size. I’m glossing over this detail because ideally the next layout pass would account for this change.

We cannot alter the number of children in either our measure or our arrange pass because doing so triggers another layout pass and so on forever. I’m going to call this the WPF Dynamic Child Count (DCC) law:

If we violate this law then we run into infinite loops and other trouble.

This means that the happy path through both our measure and arrange passes must operate on children that have already been created and added. In other words, they should look as close as possible to this:

There’s a lot of hand waving there, but:

So we aren’t breaking the DCC law.

But now we have a chicken-and-egg problem. Where do the child tick marks come from?

The solution is a compromise: create the children in response to size changes:

Why is this a compromise? Because now it’s impossible for our axis control to be Auto-sized. If we drop it into an Auto-sized cell in a Grid then it won’t show up because it’ll get scrunched out of view.

Why is that? To answer that we have to look a little more closely at our axis in this sequence of events:

In step #2, what amount of space will we say we need when we have no children yet? Note: we cannot say we need as much space as we’re given (in other words we cannot just return the availableSize parameter) because it’s common for controls to be offered infinite space and WPF throws an exception when you return that. Some finite number has to be returned. But what? Let’s settle on returning new Size(0, 0), or no space. That tells our parent that we’re really flexible and can fit anywhere. (As an aside: this is what Canvas does.)

Okay, so our parent knows that we don’t need any space. Guess what happens if our parent is a Grid and we’re in an Auto-sized cell? The Grid gives us no space! Step #4 happens and we’re told we have no space. Our only possible reply in step #5 is that we used no space. So our RenderSize gets set to zero, obviously no child tick marks will fit in zero space so we don’t create any children, so we don’t add any children, so our logical and visual trees don’t change, so we’re done. Our axis won’t show up!

It has to be told how large it is. It cannot be Auto-sized.

Caution: the code above will likely not compile. It’s just inspirational pseudocode written off the cuff.